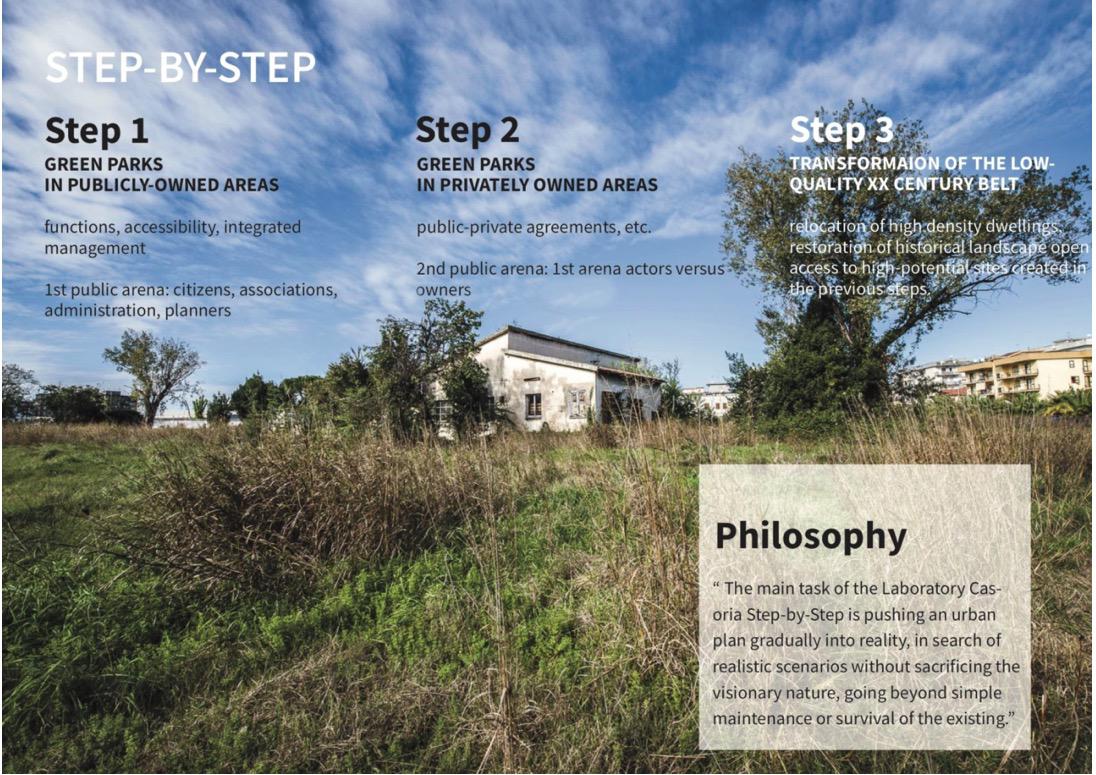 Today, the formerly booming industrial town Casoria, next to Naples, is in crisis. Several industries have relocated their factories, many shopping centres are struggling, there is a lot of vacant office space and services have been cut back. In addition, the population is in decline, unemployment stands at 30%, and citizens are generally distrustful of public policies. The urban settlements were built in a dense and illogical way and there is a lack of public space.

In 2013, the municipal administration commissioned the technical office to draft a new urban plan. The first Operational Programme focuses on the abandoned, underutilized and degraded areas – the so-called‘wastescapes’ – flanking the major infrastructures that cross the territory. The strategy uses wastescapes to push the urban transformation. In this case a large open park (forest, playground, additional facilities) – whose extension in 2025 will amount to a quarter of the entire municipal territory – will change the urban structure of Casoria. So, especially in the perception of inhabitants and stakeholders, the present brown-grey settlement will be progressively converted into a living green city.

Real and executed transformation projects are essential for the success of the planned activities. That is why the strategy starts with small scale actions: temporary public uses of abandoned lands, massive planting of trees and hedges, and steady redesign of pedestrian, cycling and ecological paths. This first steps show direct results which builds the trust of citizens in the local government. At the same time it is a learning experience for the city offices, the politicians and the participating citizens. Gradually the step by step strategy moves forward to more complex transformations: the redevelopment of brownfields, the renewal of high-density urban areas and the restoration of historical settlements.

The foundation of the public green network was the first transformative step, made feasible by the public ownership of many plots and by the low value of private plots located in the fringe. In 2015, thanks to this town planning strategy, Casoria was admitted by Antwerp to the city network Sub>Urban, obtaining funding for the Urbact III programme. Sub>Urban has been a good opportunity for enriching the public debate and improving technical skills; moreover, citizens and politicians have felt proud of their city’s participation in the network, collaborating with cities like Oslo and Vienna. A strong cooperation (for the Urbact LAP and other initiatives) with the Department of Architecture of the University of Naples has also been established, resulting in the involvement of many students, researchers and professors in the design and implementation of the Integrated Action Plan (IAP).A wide participation process has been facilitated by a massive information campaign, conducted on social media. Thus, many citizens and local stakeholders are now involved in the co-creation and co-construction of the public Michelangelo Park (about 3.5 ha, the largest in Casoria). Meanwhile, the local action group is intensively working on the drafting of a municipal regulation for the co-management of abandoned public areas.