Co-management of the green space, improving security and social inclusion through games and defining spaces together with inhabitants
Rundown segregated areas | Activating 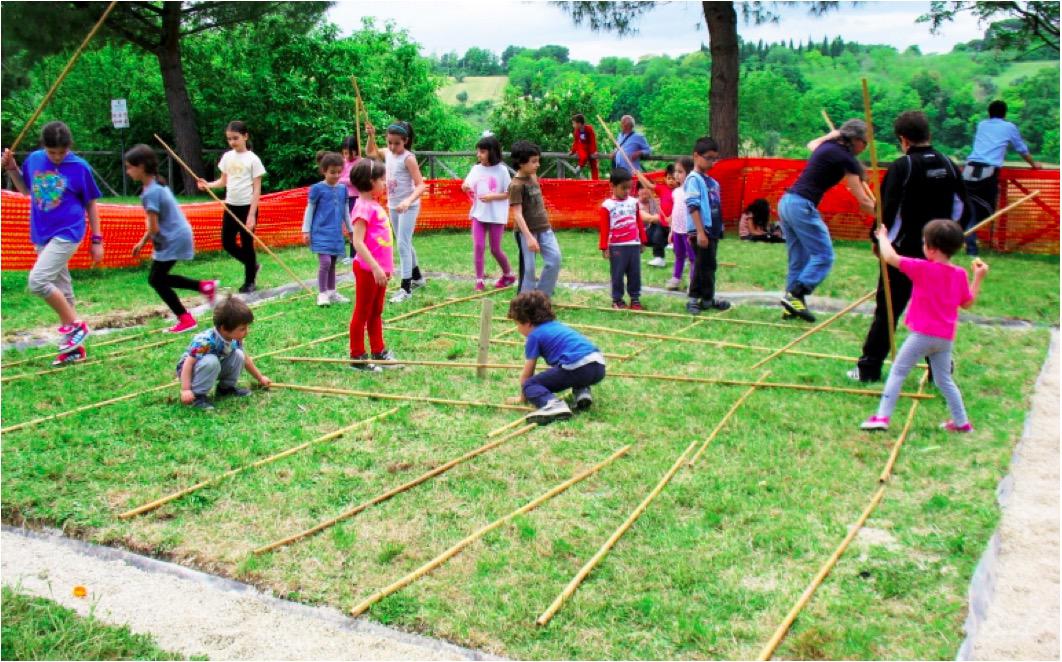 The project aimed for the re-use of urban green areas, overseen by the municipality of Macerata (IT), encouraging participatory methodologies and integration. It relates to Quartiere Pace, a neighbourhood with a high number of immigrants, a junior high school, municipal and private child-care centres, and a primary school. The purpose was to rethink this area, highly frequented by children, and rich in cultural diversity.

The project explored co-management of the green space, a different concept of security, the creation of aggregation contexts, and social inclusion. It involved building games, and defining spaces together with inhabitants. This first operation gave start to QUIsSICRESCE, a participatory planning project to improve the outdoor space of five municipal child-care centres, to share a different approach to outdoor education.

The starting project was divided into six self-construction dates during which the participants have achieved together a playful device, starting from the track on the ground of a square, the labyrinth. The Association Les Friches has played a role in facilitating the dialogue. The materials were selected from those stored in the municipal nursery: all natural (wood and stone) or recovered from older games, furniture, floors or green areas fencing, from pruning or removal of hazardous trees.

In collaboration with the Meridiana social cooperative, and with the support of the environment technical office, it has organised the construction site, planned jobs to support activities with the children and done the work of making the area safe. We tried to work together, with appropriate approaches, with all the children according to age groups.

The same approach was then applied in green areas of the five municipal child-care centres through a two-year process of participatory planning, training and self-training which involved the teachers, parents, local administrators and technicians. The project has initiated a process of change still in place, following five steps carried out in the first year: World Cafè, report, planimetry, planning.

From the earliest stages of the project, the participation of parents and educators has been essential. The people involved were invited to reflect on outdoor education and have strengthened the relationships between parents and educators. They created an important working group, which despite different knowledge and languages, had a common objective: the well-being of the child.

One constant was the involvement of technicians, managers and directors in choosing the project for each child-care centre in the light of ideas and suggestions arising from meetings with parents and educators. Periodically educators, parents and an educational coordinator would meet to share project activities and learn about the progress. A meeting of the collective has also been extended to political and administrative figures, schools and child-care centres. The project is also very focused on communication, creating a network that relies on social media, the web and e-mail.

Integrated approach to problem solving: the actions undertaken have involved a number of issues and aspects, which not only aim to rethink and respect the environment and public space, but also to set in motion a participatory dynamic, forward-looking city, a future of dialogue and discussion to a participatory and responsible community. The redevelopment of public green spaces was done without building large fixed structures but rather based on the existing environment and focusing on its potential. The process has created a community around a green space through the exchange of ideas in which all citizens had the right to participate. The community that has formed feels responsible for the care and respect of the space. In the project, participation and collaboration included more levels of relationships: the child, the educator, the family, citizenship, the immigrant population and the political, technical and administrative staff of the Municipality of Macerata.