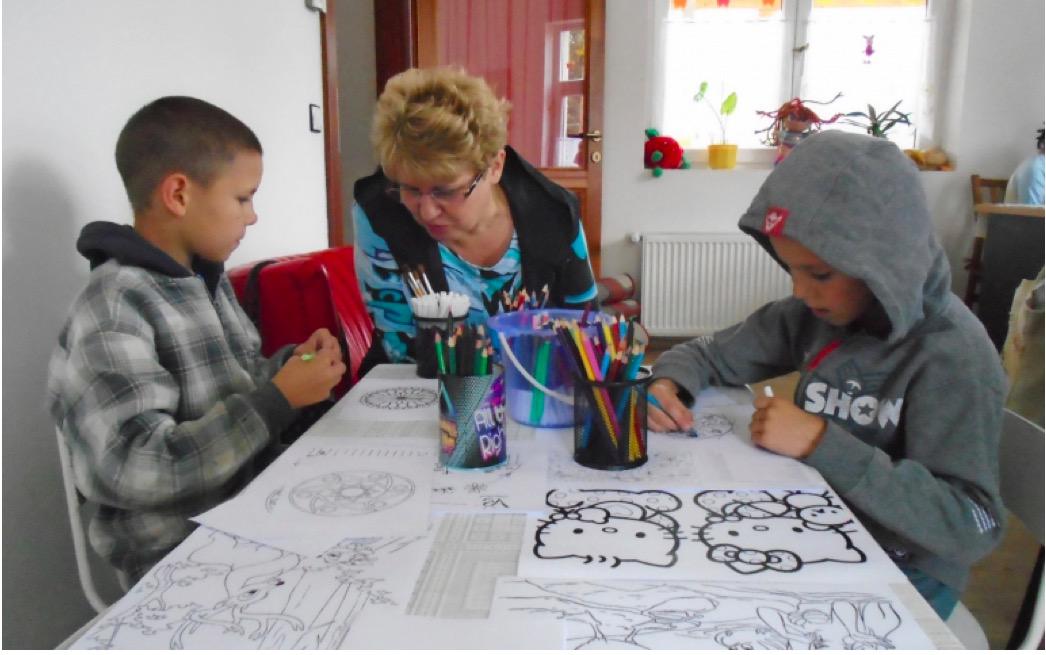 The problems of ageing, young people moving away and urban poverty are huge challenges in Kazincbarcika, one of Hungary's most underdeveloped regions. As a solution, a club of elderly people volunteered to help the young. The pensioners set up a series of workshops for kids from disadvantaged groups in a segregated district of the town. Based on their success, the events were extended to the whole town, coordinated by the family assistance service. Today, two to four people provide regular afterschool education one to three times a week for children aged 7 to 16. As a result, pupils are seeing improvements in their school performance and personal development. 15-25-year-olds can now also take part in “value transfer events”. What started as a small initiative has now led to cooperation between generations and local communities, which are included in the five basic principles of the town’s creative urban action plan “Kolorcity”.

In 2011, a new community house was realised under the integrated social, environmental rehabilitation programme in Herbolya, a segregated district of Kazincbarcika. The programmes and services had to be created, and people living there and NGOs of the town were involved in this work by the family assistance service of the municipality.

Consequently, members of “Idovár” Pensioner Culture Club voluntarily started holding creative workshops connected to major celebrations and school holidays for disadvantaged children living in the district. Due to the success of the programme, the events have become regular since 2013 and spread to the whole town. The members of the club, mostly ex-teachers (coordinated by family assistance service workers), voluntarily dealt with 7- to 15-year-old disadvantaged children, mostly Roma, who had learning difficulties and were at risk of dropping out of school.

Since then, the popularity of the events has been growing, and they are not limited to doing homework or rectifying insufficient knowledge, but they also provide mutual, confidential discussions and games. In this way, these events not only help the school career of children with learning deficiencies but also contribute to the well-being essential for their further studies and employment. It occurs in such a way that the retired generation voluntarily utilise their practical experience, knowledge through keeping children occupied, while spending their lives actively.

In the beginning, the family assistance service of the municipality worked with local NGOs while the community program in Herbolya district was being planned. They jointly shaped the services and programs of the community house. Later, the family assistance service and “Idovár” Club planned the daily, afterschool educational events together. The family assistance service recruits children with special needs to the events via its connections to families living in difficult conditions. Kids like attending the event, where in response to their needs, confidence-building discussions take place, games are played, and, later, children are helped to rectify their learning defects. The cooperation with youngsters, schools and local youth organisations is independent of the municipal organisation.

The cooperation of the older and younger generations, which developed from the revitalisation plan of the socially and environmentally deteriorated town district, was included in the integrated town development strategy. The programme, realised in 2011-12, included revitalising the town environment and public utilities, creating indoor and outdoor community spaces and providing educational, social and employment programmes. The initial, occasional programmes started by pensioners in the segregated districts became permanent and were extended to all residents of the town, especially disadvantaged children.

In the programme, the local family assistance service coordinated between civilians, who give helping hands, and the involved target groups, namely disadvantaged families and children. Due to its success, the “Idovár” Pensioner Culture Club has extended its activities: it organises casual events for disabled people; a multiple-round settlement knowledge and historical competition was organised for primary and secondary schoolchildren. In 2014, a so-called value-transfer programme was launched on topics that youngsters are interested in (e.g. partner selection, celebrations, volunteering) together with La Cosa Nostra Ensemble, a youth organisation for the 15- to 25-year-old residents of the town. It is important to note that the pensioner club is not a legally registered organisation, and its members work on a totally voluntary basis.

After the initial uncertainties, the events held in Herbolya district were visited by more and more residents (80 to 150 people per event). After completing the pilot project, four to five events were organised a year. The events did not need to be promoted as children became familiar with the programme. The regular afternoon events organised in the city centre were launched in 2013. In the beginning, there were only a few attendees, but the occasions became more and more popular: in 2016, 600 afterschool events were held, and about 25 children attended regularly. As a result of the events, the youngster’s personalities have developed, their self-confidence has improved, their mental problems have been dealt with, and their school performance has improved substantially. (The number of class repetition cases has decreased.) Many of the youths see the educators as their substitute grannies, who, by being role models and by being together have a substantial impact. Two to four teachers lead the afternoon programmes one to three days a week. The success of the program has inspired pensioners to cooperate with other youth organisations, such as La Cosa Nostra Youth Organisation, and to organise further value-sharing events.

Judit Juhasz-Nagy, Advisory office of the municipality of Kazincbarcika