THE POWER OF ARTS AND GREEN, PFORZHEIM, GERMANY 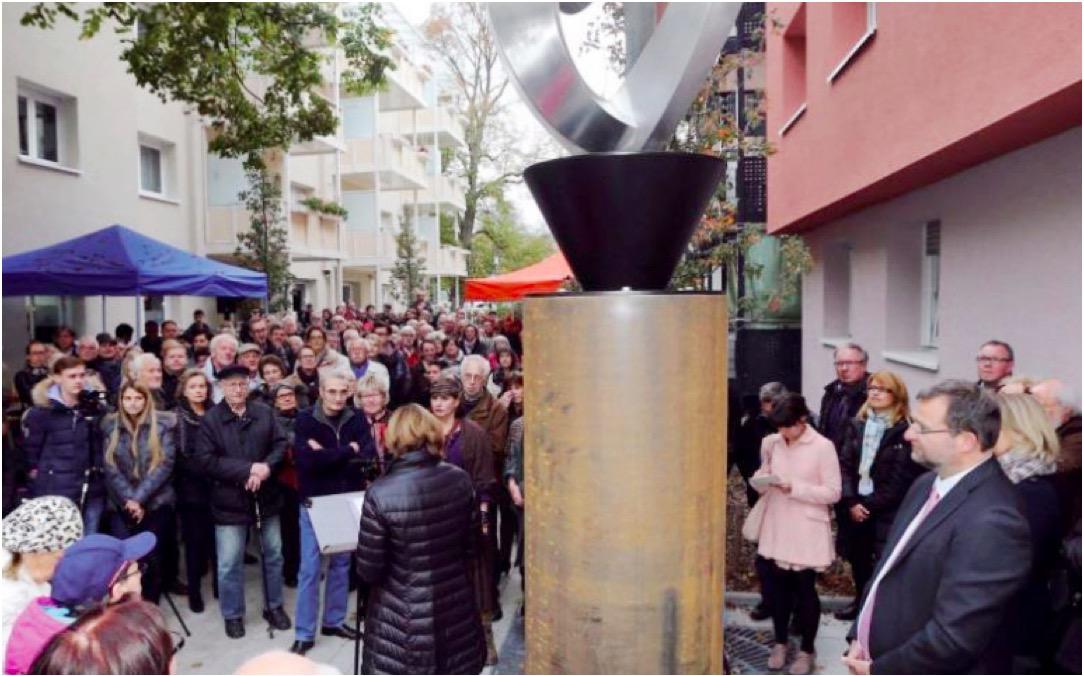 With a concentration of problems like lack of social cohesion, littering and damage to property in its 3 000-person multicultural district of Kaiser-Friedrich-Street (KEF), the city of Pforzheim (DE) followed an integrated and participative approach to revitalise the district. In order to make the living environment more pleasant and to improve cohesion, the idea of an artistic project and greener spaces emerged from the population. At the initiative of inhabitants, a sculpture mile with 100 new trees was created with the help of a local artist. The sculptures with the trees improved the quality of time spent in the public spaces. Meeting points arose and contributed to intergenerational and intercultural exchanges. The new urban green space provides a significant contribution to the fight against climate change and the inhabitants have taken responsibility for their environment as tree sponsors. Likewise, the district has gained a new image through art. The project is consciously designed on a long-term basis in which the existing works of art are replaced by new ones every three years.

Within the framework of the integrated urban development, a survey of strengths and weaknesses was carried out. Many problems in the neighbourhood, such as lack of cohesion, litter and damage to property, were due to the fact that many residents did not identify with their neighbourhood, and the district had a bad image within the whole city. The good practice offered the following solution: inhabitants strongly involved in the shaping of the previously disadvantaged neighbourhood and by the realisation of a renowned sculpture mile.

The identification the citizens have with their quarter has been significantly strengthened. The sculptures along with more than 100 new trees improved the quality of time spent in the public spaces. Meeting points arose, contributing to the activation of urban life and to intergenerational and intercultural exchange. New networks or productive neighbourhoods lead to the emergence of solutions from the district for other challenges, such as unemployment or the increase of anonymity. The new urban green space provides a significant contribution to the fight against climate change, and the inhabitants have taken responsibility for their environment as tree sponsors. The emergence of ownership through “Urban Nature” thus represents a formidable solution and has helped to strengthen the identity and self-confidence of the inhabitants. Likewise, the district has gained a new image through art.

In 2007, urban renewal began in the district of KEF. The starting point was a survey of existing strengths and weaknesses in the quarter within the framework of the Integrated Urban Development Approach. The overall goal is to create the best possible conditions for sustainable urban living in a deprived quarter involving all relevant stakeholders as civil society, practitioners, elected representatives, city and district managers or the private sector.

To make the living environment more comfortable and to improve identification, the idea of an artistic project, together with a local artist, emerged from the population in addition to the streets being made greener.

The project Urban Nature was born. It is a sustainable and affordable practice bringing together social, cultural, economic and environmental actions. The project is consciously designed for the long term, in which the existing works of art are replaced by new ones every three years. Thus, the project is constantly being given new momentum.

From the start, the urban renewal process has followed an integrated and participatory approach. Urban Nature is a project of local citizens. The idea arose in the district council, consisting of 25 citizens and traders who meet once a month. Not all ideas and proposals can be implemented, but it is positive to note that citizens have a strong sense of cost-consciousness.

In addition, great importance is attached to the fact that the district council is involved in the implementation of the measures themselves. This clarifies that the body can express wishes, but they can only be implemented if citizens contribute. Due to the close cooperation among different stakeholders in the district council, the idea of the sculpture mile and the greenery quickly resulted in concrete plans. The city administration was responsible for setting the foundations for the sculptures, planting the trees, lighting etc. René Dantes, a local artist, created five sculptures. Citizens assume responsibility for the care of the trees and the sculptures. Companies from the district and the entire city committed themselves to sponsoring.

The good practice Urban Nature is a real example for community-based placemaking with, and not for, communities. It is a project which demonstrates the strong commitment of local stakeholders in the development and implementation of the practice, which has led to a high level of acceptance and sustainability.

The concentration of numerous negative factors had resulted in a depreciation process with missing cohesion, misuse, damage to property. The sculpture mile Urban Nature has significantly contributed to the improvement of the situation in the district. The most important impacts are: Residents identify more strongly with their neighbourhood and with the sculpture closest to their home. They talk about the developments in the district and discuss the change, which was rarely the case before. The sculptures have also become important places for identification and encounter. The image of the neighbourhood has changed.

In addition, the trees contribute to the fight against climate change. The inhabitants take responsibility for their environment as tree mentors. There is no other district which provides such an abundance of possibilities for participation. Results achieved are:

As statistical data is not yet available for 2016, it is difficult to give evidence of impact. However, the stakeholders have the impression that the project resulted in a stabilisation of the social structure, mixed population and active neighbourhoods and overall improved the quality of the housing environment.