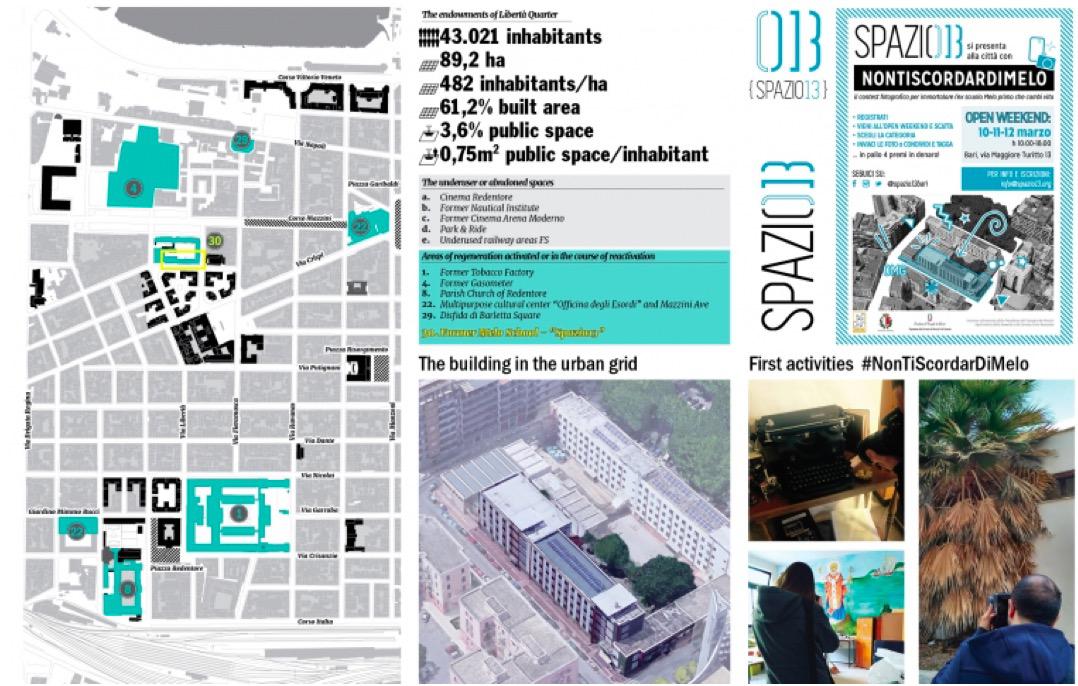 SPAZIO13 is a community experience of social innovation and reuse of a decommissioned public building, having triggered the involvement of residents and stakeholders in the transformation process affecting the neighbourhood. This urban regeneration process includes an extensive network of 15 youth associations. In addition to the public multicultural nursery school set up by the city, the property of 1,000 square metres is composed of three areas: 1) Informal Education (architectural/engineering design, photography, startup businesses, digital communication); 2) Making (fabLab 3D printing, carpentry, audio/video production, recording music, photo printing); and 3) Events and social spaces (co-working, public library, public events and conversations).

SPAZIO13 offers a virtuous and subsidiary solution of community conversion of an abandoned public space strongly integrated with urban regeneration through social innovation levers and the leadership of a local youth network. A good practice of conversion, participation and innovation focused on communities, residents and local economies. SPAZIO13 is a learning space and its concept was started by a collective research action conducted on the neighbourhood identity by 15 associations of young architects, urban planners, designers, photographers, communication experts and European policies experts with residents, families and young residents. Through its participatory methodology approach to conversion of public space, SPAZIO13 is an antidote to gentrification in city suburbs. Its cultural offering, stratified into different sections (education, production and collaboration), provides interdisciplinary and multi-target methods for dialogue with the neighbourhood, highly integrated with the local networks and strongly oriented objectives of economic rebirth.

SPAZIO13 was inspired by the will of the city to convert the former school in the target neighbourhood of its regeneration strategy. A local group was selected after a national tender. SPAZIO13 is a collaborative project that is based on the participation of civil society and local networks preliminarily involved in the co-design phase of conversion. The city of Bari established a partnership with the local group. Subsequently, the partnership involved the local university, representatives of the local economy, cultural stakeholders and residents' associations to define the best proposal. The start of the conversion has been marked by two important experiences: a photo contest opened to all residents to attest to the school’s identity before the change with a hashtag on Instagram (#nontiscordardimelo) and Huffington Post as a media partner, an experience of collective self-building to adapt the spaces at the new functions. The space was furnished through an open call to residents to donate disused furniture and fittings in exchange for participation in the courses. Neighbourhood focus groups were held to define priorities and activities.

Some results of SPAZIO13 have already been achieved, and other objectives are being realized. The results achieved and expected are: