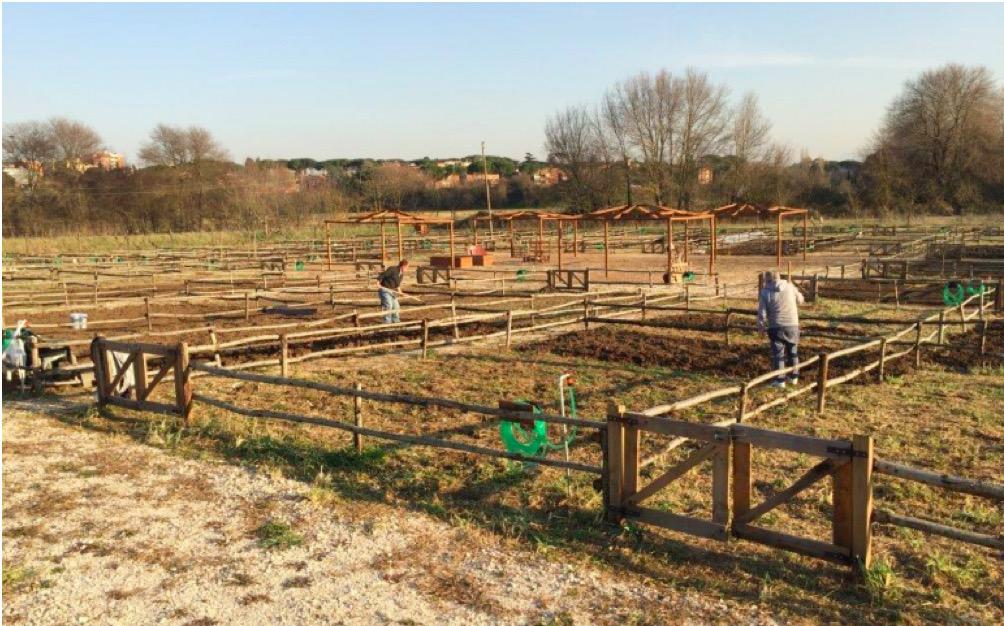 Using an important area of its territory that is suited to agriculture (51.7 ha), the city of Rome (IT) developed a participatory urban gardening project. The aim of the project is two-fold: it fights social exclusion and poverty and allows brownfield recovery. The project already concerns 27 ha of the available land, thus promoting a sustainable and eco-friendly urban gardening approach. Working with NGOs, citizens, disadvantaged people and minorities, the city uses the urban and suburban agriculture as a means to improve governance processes. Alongside employment policy, social and intercultural dialogue has a pre-eminent role to play. The importance of other factors such as housing, health, culture and communication should also be acknowledged.

The good practice contributes to the improvement of the governance processes by connecting different competencies and municipal offices such as social, environment, urban planning and innovation departments.

Rome is a major metropolitan area with a vast urban agriculture area of 51,729 hectares (the widest within Europe). While most green areas are located outside the urban perimeter, several agricultural corridors connect the periphery with the city centre of Rome.

This unique feature distinguishes Rome from other European cities that are characterised by a division between urban and rural areas. Rome thus offers a unique potential for further development: citizens are now developing permaculture systems and producing healthier organic food for self-consumption.

The aforementioned projects' approach to tackling urban challenges is the result of a territorial cooperation process, involving different partners of the Mediterranean Basin under ENPI CBC MED Programme: the Royal Botanic Garden and the National Department for Forests and Agriculture (Jordan), the city of Mahdia (Tunisia), the metropolitan area of Barcelona and the City of Rome.

Participatory mechanisms for communities and citizens in the new UPA policies/actions allow the former groups a greater capacity for action and decision making on Urban Governance: Urban Agriculture management strategies herein are oriented towards participatory citizenship.

Stakeholder like local NGOs and horticulture associations did contribute to the set-up of the Regulation of urban gardens (City Council Resolution, July 2015) activating local representatives of such communities in a process of social and intercultural integration. Socialisation among different communities is the core of this activity.

The previous experience allowed the City of Rome to create 3 pilot projects that cover more than 70 ha assigned to different non-profit, multipurpose associations in charge of needy and disadvantaged people. At present, approx. 300 people are direct beneficiaries of the parcels. Dozens of associations and thousands of citizens are involved in the pilot projects, and awareness was raised among municipal officers and citizens.

The Regulation of the Urban gardens of Rome (City Resolution of July 2015 or “Regolamento degli orti urbani”) is to be considered an extremely important outcome as a governance tool. According to the “Regolamento”, the use of pesticides, chemical fertilisers and GMO seeds are prohibited.

The sustainability of the UPA pilot project is ensured by the commitment of the City of Rome (i.e. the “Regolamento”), the Districts, the associations as "managers" of the pilots, the thousands of citizens involved, and by the coordination with a network of urban gardens and other local and national organisations.