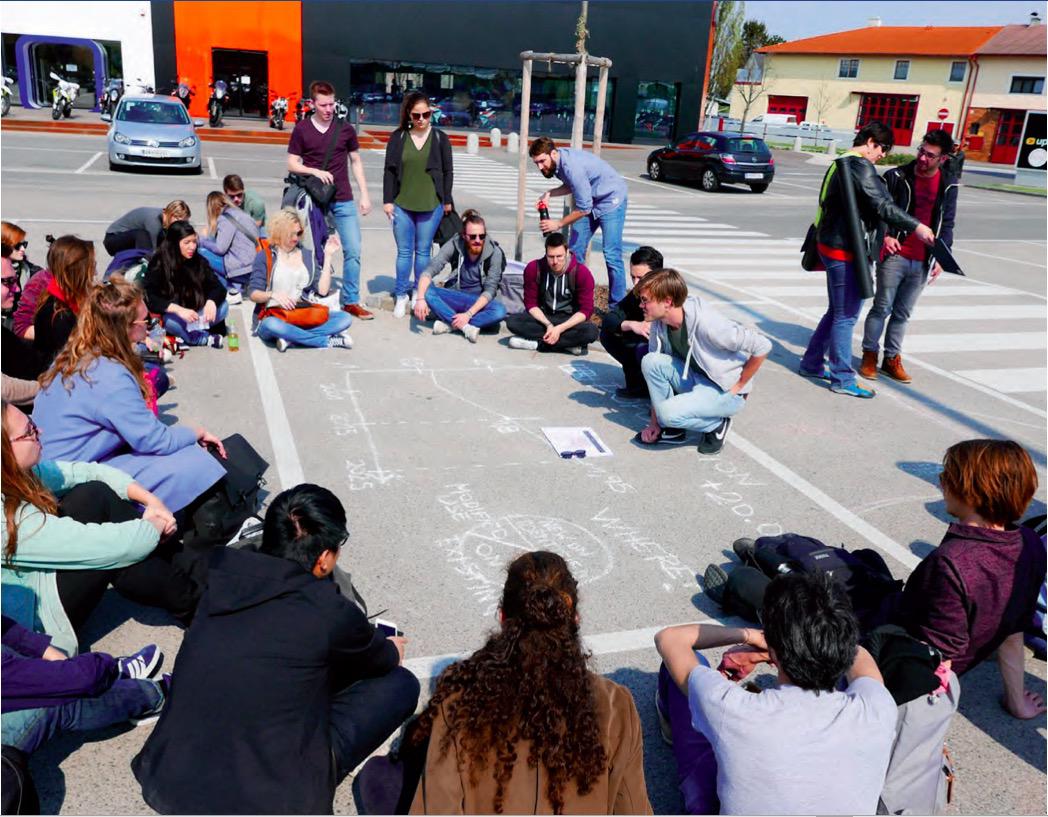 Vienna is a city that grew considerably and compactly in the 19th century. After the Second World War, with the division between East and West Europe, it lost its central position. While other cities grew rapidly and often sprawled, Vienna’s growth stopped. In recent decades, however, the city reassumed its connecting role between East and West and as a result is one of the fastest growing European cities. The municipality boundaries are very tight around the historical city, leaving Vienna no choice but to work together with neighbouring communities to provide houses, amenities and jobs. Vösendorf, a small neighbouring

community of 7,000 habitants in the south-west, built large retail and shopping centres on the boundary with Vienna during the 1960s and ’80s, which proved to be very profitable but put strain on its relationship with Vienna. Today, however, both municipalities need each other. A large part of the retail area in Vösendorf is decaying and in need of transformation while Vienna is actively looking for new neighbourhoods to absorb their growth in a connected and sustainable way. The two municipalities decided to work together in the URBACT network to imagine a future for a part of Vösendorf and Liesing, bordering the 23rd district of Vienna.

According to Austrian constitutional law, the municipality – the lowest administrative entity – is responsible for land use planning. Each of the nine Austrian provinces has its own planning law, and the municipalities are obliged to apply it in their own spatial plans. Vienna is a province and a municipality at the same time. While our neighbouring municipality Vösendorf applies the Lower Austrian Planning law, Vienna uses its own. Thus, there is no formal authority that coordinates and regulates planning across provincial borders in a formally binding way.

As there is not much likelihood of any change in the near future, we are trying to work together in a more‘informal’ way. The Stadt-Umland-Management acts as an intermediary to help us manage such processes. Generally, institutions act within their own competences and hierarchies. When elaborating the Integrated Action Plan, we tried to overcome this hurdle. We asked all relevant stakeholders to  contribute to the discussion by thinking very freely about ideas for the cross-border project area.

We invited them to a series of workshops, walks and bilateral talks and followed the principle that any event should take place on the spot, for example in a local discotheque. The various participants drafted a vision, which led to four scenarios: the so-called Stories from the fringe. They act as the basis for implementation projects we want to initiate. The structure provided by the URBACT sub>urban network allowed us to establish a more sustainable working routine. At the beginning of the project, we reached a formal agreement between Lower Austria, Vösendorf and Vienna on personnel and financial contributions. We got to know our neighbours, their perception and visions. We contributed to a better climate of trustfully workingtogether. The project acted as a broker for cross-administrative relationships. We reached the most relevant institutions and players on an administrative and political level, and some of the landowners. As one outcome of the Integrated Action Plan we are going to tackle five implementation projects. As a second step – in line with the topic of each project – we would like to involve the people who work or live in the respective area. We are starting to notice an increase in awareness. Cooperation between all administrative bodies in a metropolitan region seems to be essential for prosperity and a sound settlement development. However, there are still a lot of open issues when it comes to financial themes like sharing infrastructure (e.g. hospitals, schools and commercial areas), sharing costs and tax revenues.

Try to develop a sustainable cooperation structure that does not depend solely on the commitment of active individuals. If certain restraints look likely to hamper cooperation, focus on themes which promise feasible; step-by-step wins.