POP UP TO DATE, ANTWER, BELGIUM 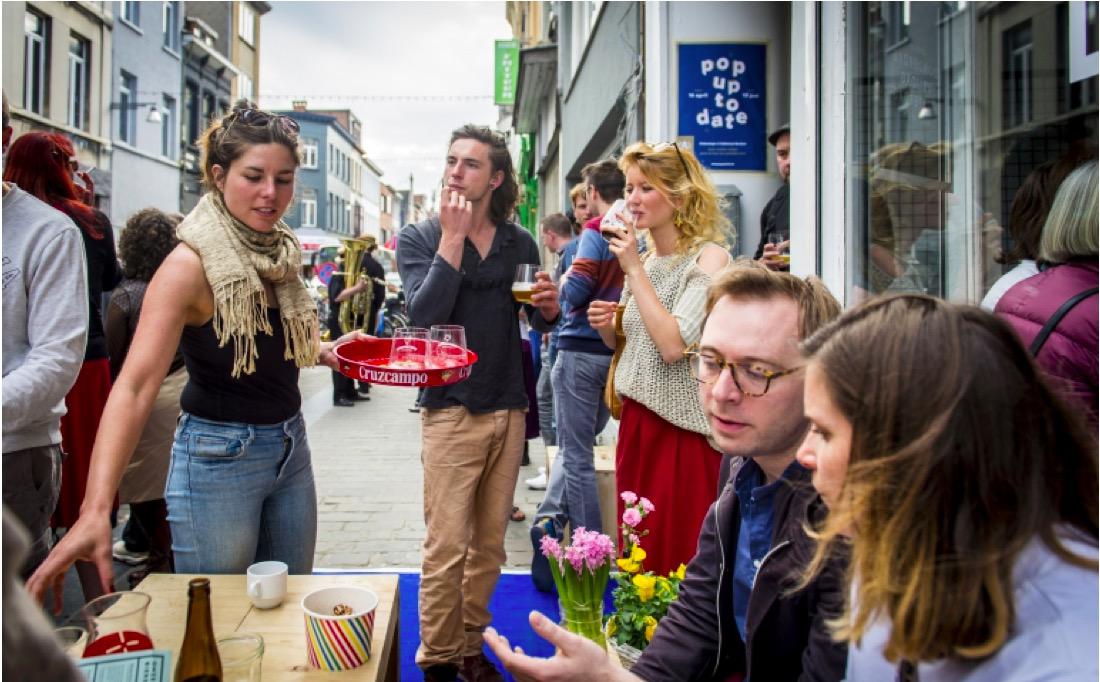 The activities of Pop-up-to-Date pivot around the conversion of vacant commercial properties into springboards for creative entrepreneurship. Supporting pop-up shops is not an innovative solution for transforming run-down neighbourhoods into vibrant city districts. Many local authorities experiment with pop-up policies. Very few, however, have an encompassing approach such as Antwerp (BE), for linking creative entrepreneurs to vacant retail units, which has been proven to work and produces lasting effects on both district and city level. The integrated multi-stakeholder approach displayed in Antwerp's Oud Berchem neighbourhood has proven to be an effective as well as inspiring methodology to transform a depreciated shopping area into a lively axis of creativity. The success ratio for the conversion of vacant retail units stands at 70%, with 60% of the units being long-term rented, and 10% being sold to entrepreneurs.

The activities of Pop-up-to-Date pivot around the conversion of vacant commercial properties into springboards for creative entrepreneurship. However, what’s most essential is the radical choice for a collaborative multi-stakeholder approach, which brings together different government levels, entrepreneurs, non-profit actors and local inhabitants.

In this project, the local government takes up a role as enabler and funder. Non-profit organisations build on their close links with local communities and property owners to match vacant properties with creative entrepreneurial spirits. The approach starts with identifying the owners of vacant retail units on the one hand, and creative entrepreneurs on the other hand. The vacant retail unit is rented by a non-profit organisation on behalf of the local authority. Because the focus lies on decayed properties, it is lightly refurbished by means of local government funding prior to the rental period. During a fixed time frame of two months, it is then provided at a reduced tariff to starting creative entrepreneurs to try out their business in a real-life environment. After the project period, the profitability of the business and further ambitions of the starting entrepreneurs are evaluated, and customised coaching and counselling are made available.

In the original set-up, the local government worked in collaboration with and funded, LCB vzw (a local government non-profit organisation for local cultural policy) to match entrepreneurs and owners. The original funding scheme was elaborated in close cooperation with the local shopkeeper association. At any stage of the process, very close relationships were established with the involved creatives.

Inspired by the results during the first editions of the biennial project, a new non-profit organisation, Creative Cities vzw, was created by local entrepreneurs. Creative Cities vzw has gradually developed complementary activities by providing starter coaching and mediation between owners and creatives following the two-month rental period. Due to their involvement, the impact of the project in terms of the number of retail units and entrepreneurs involved has increased. LCB vzw and Creative Cities vzw have concluded a cooperation agreement to further fine-tune their partnership and maximise their collaborative impact towards Oud Berchem. Also, the involvement of Creative Cities vzw has taken the project to a new level by creating structural partnerships with SYNTRA (the regional Flemish Government Agency for Entrepreneurial Training) and UNIZO (Organisation for the Self-Employed and SMEs). A next step is the approved ESF Transnational funded project “The Suburb Start-up Guide”, in which a higher education institute is involved by analysing the policy measures.

The integrated approach of the project in Oud Berchem is exemplary for the horizontal and vertical integrated approach championed by URBACT. Horizontal integration results from multiple stakeholders joining forces to provide a mix of policy measures, ranging from financial stimuli, direct support by refurbishing retail units, coaching and matchmaking activities, aftercare through mediation between entrepreneurs and property owners to local community building activities (e.g. a quarterly neighbourhood newspapers, workshops etc.) and neighbourhood marketing. The soft measures in this project fit into a broader neighbourhood oriented strategy, involving ‘hard’ ERDF investments to increase the attractiveness of the shopping area in Oud Berchem and stimulate owners to renovate their commercial properties.

Vertical integration is found in the expanding cooperation between the local authority, intermediary non-profit organisations, the Regional Government Agency for Entrepreneurial Education and different local stakeholders at the neighbourhood level.

After three successful editions, the results are remarkable: