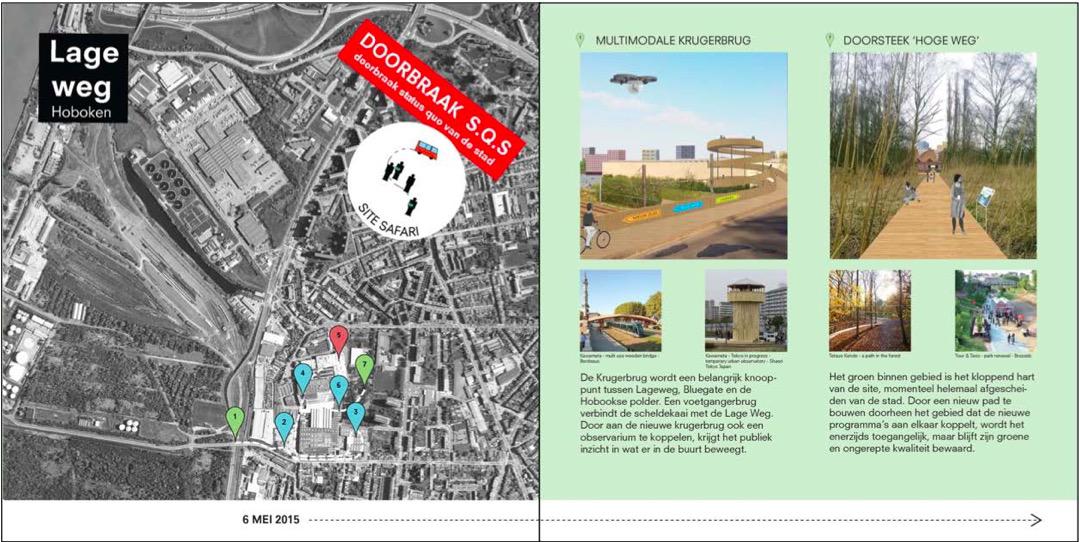 The Lageweg project site is situated in a semi-industrial part of the Antwerp fringe. The area is in decline for years and has become known as a no go zone. It is characterised by large, empty factories, an inaccessible locked-in green space and rundown illegal houses. Bars are closing in the area, there is an increase in small criminality, there are noise and dust complains of the industry that is still working and bailiffs collecting back pays are more and more common. The area is locked in a status quo. The project Lageweg is a hybrid building block, where different zoning areas (industry and housing) are touching each other. Almost all the land is privately owned, there is almost no public land position. There is no real social connection between inhabitants and users of the place. It is in need of transformation lest it continue to deteriorate or be developed plot-wise without added public value. It was paramount that the city should break through this local status quo. The aim for the city is to create an integrated development. We set ourselves the ambitious goal of enhancing the

To make a breakthrough in the situation, we are depending on the initiative and will of different private landowners. The city wants to change the area into a qualitative and mixed neighbourhood, so we want to initiate and speed up this transformation process by facilitating and making connections between different stakeholders of the neighbourhood. Therefore, we planned 5 discussion moments around a table with the landowners. During these meetings, we did not avoid conflict and discussion, since this puts the different point of views of the stakeholders openly on the table. But we dealt with this by changing topics from spatial, over juridical and financial models, giving us time to search for consensus in seemingly different goals.

The content of the 5 moments was not planned in advance because of the coalition building and consensus based negotiation but it was constructed around 5 tools:

Starting with mind-opening dialogues and an exploratory kick-off discussion, we defined collective ambitions for the area. The first idea of a multi-plot development was born. Each owner started looking beyond his/her own plot, enlarging the spatial opportunities.

Another instrument was a safari tour of the site in the form of a guided walk with all the stakeholders. The brochure made for the walk showed the soil contamination and possible future development scenarios in one, five and twenty years’ time. On the one hand, this information made the owners aware that the current land use plan needed to be changed in order to realize the long-term plan. On the other hand, it became clear that soil decontamination was an issue for more than one owner. One of the owners demanded that the land use plan (RUP) be altered or he would withdraw from the co-creation project on this site. At this point, the role of the city evolved from facilitating to regulating, denying the owner’s demand in order to stress the importance of a joint plan and a common urban vision.

A second step was co-creating a design plan for the area and making it more visual by using an interactive scale model. This prompted one of the private partners to ask: “What is my financial gain?” In a classic process, providing the answer to that question would delay the entire process. In the Lageweg process, however, we started to work simultaneously on the financial aspect of the multi-plot development. Working on parallel tracks speeds up the process instead of blocking and delaying it. The financial question not only demonstrates the benefits of the process used in Lageweg, but is also a key in identifying the actual land owners. For example, at a certain point it was necessary to have a spatial and financial calculation model drawn up by experts. When it came to signing the declaration of engagement, we discovered that some land owners had representatives. This is crucial information because it revealed the identity of the true decision makers early in the process.

The Lageweg pilot project is a learning process, both for the city and for the owners concerned. The government has to assume the role of facilitator to get all stakeholders to support a co-creative vision and ensure that the owners make it happen. At the same time, it is necessary to guard the common interest. This balance is a continuous challenge. Another possible pitfall is the tendency to relapse into a classic planning process, especially when there is a lot at stake and despite knowing that the classic process does not guarantee the best results. Lageweg is a pilot project, in which ideas are tested through trial and error in a contained setting. Another challenge is to capture the learning points and share the knowledge and lessons learned. The pilot project is in that sense a search for a way authorities and citizens can work together on the future of the city. We are convinced that this will lead to a more sustainable form of urban renewal.

First producing plans then dialogue      ><        Mix of production and dialogue