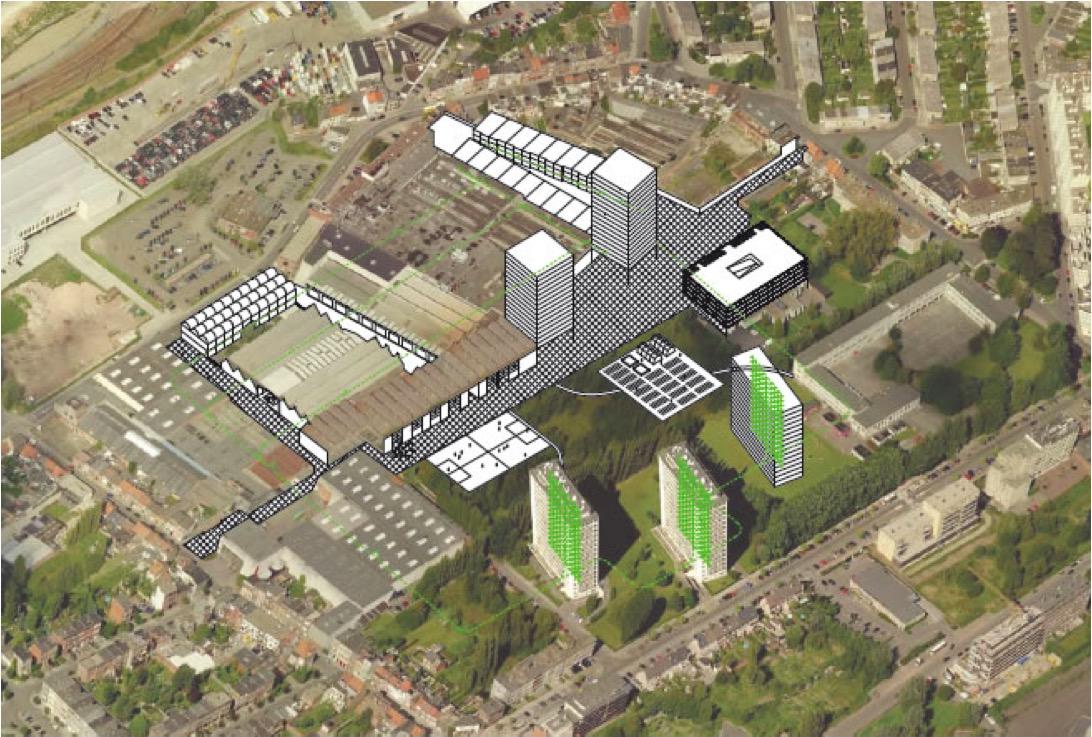 According to general prognoses, the city of Antwerp is expecting a large increase in population (+ 20% in 15 years). We observed the first effects of an unmonitored population increase on children, who were unable to find a place in schools. At the same time, the departments of planning and building permits were confronted with more and more building applications for developments in the 20th-century fabric. The city’s urban strategies and regulations were tailored to brownfield redevelopment and to the rigid 19th-century building blocks and older areas of central Antwerp. However, our standard solutions did not seem to be suited to the 20th-century fabric in the fringe.

We didn’t know how to intervene effectively in this hybrid context. So, two studies were conducted within the city administration. The first gathered all the available GIS data and the second analysed the historical growth of the city region. With these two studies, we shared the knowledge that was already available within the city administration; the data analyst and designers who worked on the study became the first members of an expanding sounding board of experts. At the same time, we were inspired by Bordeaux’s ‘50,000 logements’ process, directed by La CUB (Communité Urbaine de Bordeaux/Bordeaux Métropole). In particular, the parallel research by different design teams, each with their own specific perspectives, caught our attention.

Lab XX’s second step was to select four design teams. It is important to note that the teams did not have to provide a solution for the entire challenge or the entire area. The assignment procedure made it possible to select four complementary approaches. Together the teams produced a vision for the 20th-century belt made up of four different scenarios. This is what is called ‘research by design’: different scenarios that reveal the potential of an area are used to guide the discussion and to communicate with a wider audience. Gradually we learned to be selective in terms of who we invited. Everyone from the city, the teams and the external experts needed to bring something to the table. We learned to use different process tools to stimulate interaction and exchange, while trying to eliminate rivalry. We learned to use the knowledge and data within the city administration to guide the teams. At the same time, the external experts taught us to look differently at the places and the assignment. The design based research that was conducted within Lab XX is primarily a study of the area’s potential. The outcome of Lab XX is not a final plan for how and where to compact the city. In fact, it mainly helps us to understand what is feasible and how densification can be linked to qualitative urban renewal.

At the same time there were parallel research studies on smart densification in Ghent and the Flemish region. In Antwerp, people from mobility, social and environmental departments launched studies on the future of the 20th-century belt. Students in several architecture faculties in Flanders were also working on the fringe. The discussion expanded to the neighbouring municipalities south of Antwerp. URBACT created the opportunity to exchange knowledge with eight European cities on the topic. The community of people thinking about – and experimenting in – the post-war urban fabric is growing. Now the challenge is to gather all this knowledge together and go one step further using smart policy decisions. That is the objective of the Integrated Action plan in Antwerp.

Gradually the assignment changed. Instead of being treated as a bad thing, population growth was to be welcomed in the 20th-century belt as a necessary condition for qualitative and sustainable transformation. The living lab experience enabled us to reformulate our question.

After one year of work and discussions, we produced a publication and organized an external debate aimed at getting as much feedback as possible. We seized this moment to evaluate and decide on the next steps. A flexible plan does not mean you are in a constant state of uncertainty. It means that you have a plan that you implement and communicate, but there is also scope for periods of uncertainty during which you evaluate and adjust. One of the criticisms was that Lab XX focused on housing and amenities, and did not give sufficient consideration to the question of growth and variety of job opportunities. So Lab XX expanded to include other topics. A new assignmentwas drawn up and three design teams were selected to focus on industry and jobs. They involved factory owners and included them in the design process. New techniques of participation and drawing were used to capture their interviews and discussions. Initially, we were a bit sceptical about this direct participation in a research study for developments that were not going to be physically built. However, we considerably enlarged our community of people talking and thinking about the potential of the fringe.

And what happened on the ground? Within the city administration, there is a team of six designers who are conducting ‘research by design’ into the complex planning processes for projects that are not amenable to assessment using standard spatial instruments, and opening up the discussion with preliminary research and scenarios and enabling us to test the strategies proposed during Lab XX in real projects. Thus, thinking and acting are working in parallel. This immediate testing of concepts allows us to continuously discuss and fine-tune them in real-life cases and with real-life stakeholders.