The municipality of Santa Coloma de Gramenet, part of the Barcelona Metropolitan Region, makes use of top down innovative legal instruments to break their deadlock situation in trying to improve an existing urban area together with the residents and in this way give respond to a bottom-up ambition by the majority of owners to refurbish their housing block.
Environmental unsustainable areas / buildings | Activating Financing Mainstreaming 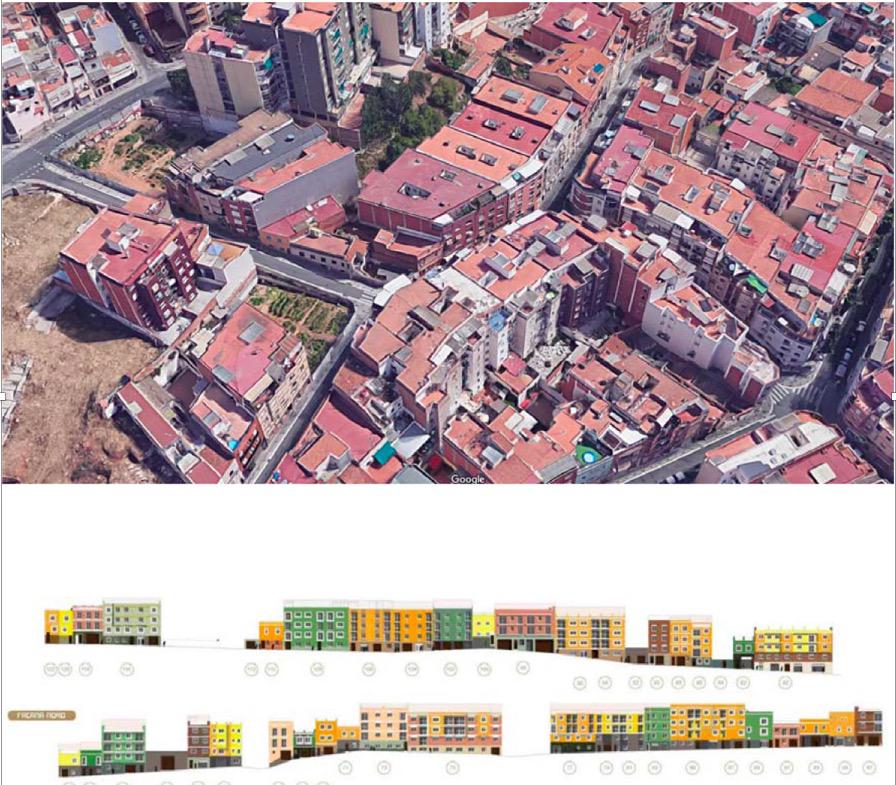 Pirineus street is located in Santa Coloma de Gramenet, a city on the left bank of Besos River. From 1955 to 1975 Santa Coloma’s population increased from 20,000 to 140,000 inhabitants. In those days the city grew without the social infrastructure and open spaces. Since 1975 these lacks are being tackled focusing on public facilities for example with projects like the Bru axis. However the new immigration wave from outside the EU, the construction boom and the subsequent financial crisis have hit strongly to this neighbourhood blocking the traditional regeneration tools on building renewal and increasing the neighbourhood decay. The area who’s density increased dramatically between 1955 and 1975 (from 20.000 to 140.000 inhabitants) is now facing several problems. Next to a lack of public space and public infrastructure, many buildings are  in a bad state and need to be made more sustainable. The ownership is fragmented, since all the houses are privately owned. Previous attempts by the municipality for collective renovations were blocked by individual owners who were not willing to pay their share.

To unblock this situation and help the private property regenerate themselves, the council combined two laws and designed a clear legal framework for the project.

The law makes it possible to define an area in which the burdens and benifits are shared proportionally to their own % of ownership. The main implications are: Owners must pay the proportional part of the cost of the refurbishment. The property is the warrantee of the payment (access to the Housing Property Register). The administration can make pressure to the private to recover the money. With this legal framework the council has done a feasible refurbishment project for every block discussed and negotiated with the owners through a clear bottom up approach. Depending on the type of tenure, the owners have different possibilities to pay the refurbishment: Owners who let the flat have to pay everything at the beginning. Empty flats owned by banks or investors have to pay everything at the beginning. Owners who live there have three possibilities to pay: (1) Pay everything at the beginning, (2) Pay the debt monthly, (3) Don’t pay it, and annotate the debt in the Housing Property Register.

Cities can both help and force private owners to improve the sustainability and condition of their property. In the end this is a political decision.

Compared to a more traditional Barcelona approach where existing buildings are demolished and replaced with more square meters to finance everything, the process in Pirineus street takes longer, is far more complex and uncertain and financially less profitable for the municipality. On the other hand the traditional approach no longer works here due to financial crisis and the fact that housing prices went down, so the municipality is forced to investigate new ways. This new approach is less traumatic in the sense that existing buildings are preserved and improved, the community is better engaged and other problems such as speculative subletting, the needs of the elderly, lack of financial means of owners are better detected and addressed.