HALLES FLEXIBLE SPACES WITHOUT ANY DEFINED USE, NANTES, FRANCE 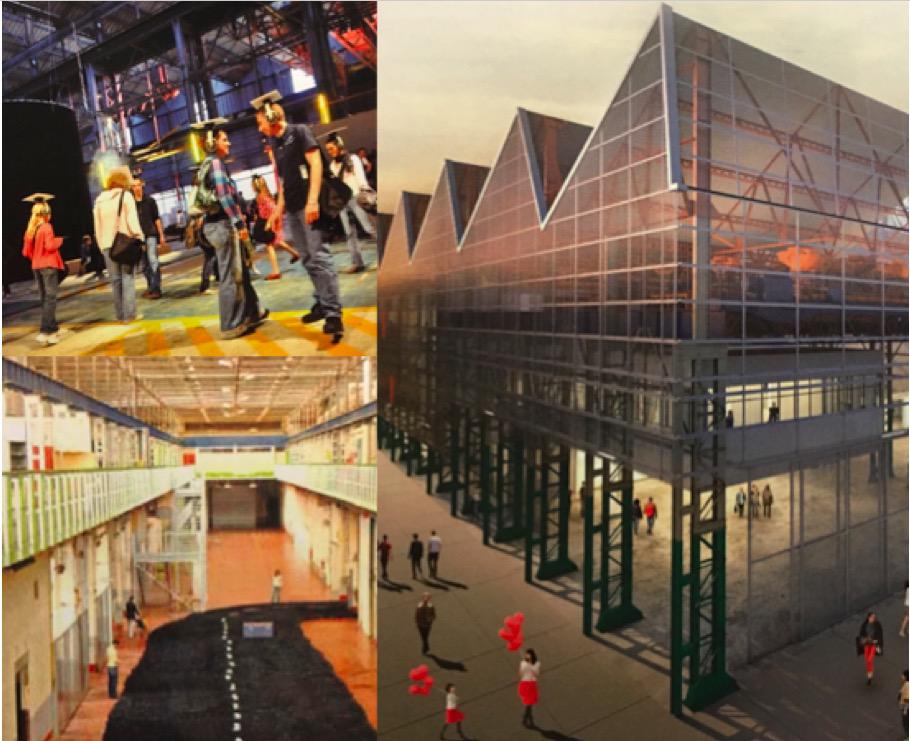 Facing the historical center of the city, the 30 000 m² Alstom Factory Halls are at the heart of the urban renewal plans of the Island of Nantes. The end of the industrial activity of the Alstom Factory allows the SAMOA (Urban Development Agency of the island of Nantes) to install its offices in the building to be itself in the center of the urban project. The capacity of the building enables many different uses and functions for a few years while the urban development project evolves and takes on a more definite project for the building.

From the moment the building was opened in 2003 the first entrepreneurs of the creative and cultural industries quickly seized the opportunity to use the Alstom Factory in many different ways. Underground artistic installations, cultural events, electronic music festival, experimenting and prototyping are a few of the ways in which the space was used. It gives the building a crucial role on this part of the island, which then rapidly becomes the creative district.

In 2008 the decision was taken to move the Fine-Arts School into part of the Alstom Factory. The goal of the rehabilitation project was to redevelop the site in such a way that it can be the driving force of the development of the creative district and its network.

The current challenge is designing new buildings with temporary uses, it is no longer a matter of occupying empty spaces. Because of the progress of urbanization, the vitality of the Metropolitan Area and the habit and desire for temporary uses, there are less and less possibilities of vacant and empty spaces. In a sense, victims of its success, Nantes suffers from a lack of those empty spaces and must rethink them within new buildings.

Therefore, the most innovative way the SAMOA has thought about adapting temporary use in the new building is the fact that some of space is programmed without any defined use. The idea here is to have possibility, a capacity to be flexible, and to stop anticipating the future and any unknown functions and uses of the building.

Uses and functions evolve at a much faster rate than any administrative decision process, building code or public procurement procedure and it seems pointless to try to anticipate and freeze the possibilities of the building.

One of the ways this is reflected in the architectural program is the presence of a principal function for a given space, and taking into account the current building restrictions, to see what other functions could be programmed in this space. But it is also, and mainly, reflected in the presence of undefined spaces. These are spaces within the building that resemble outer space in the sense that they are robust and left with a rough finish. The 250m² entrance hall of the Third Space is an example, or the 2 “atriums” in the business incubator, 2 “winter gardens” … Several large spaces are thus left open and will allow temporary use within a permanent building depending on the needs of the occupants or different stakeholders.