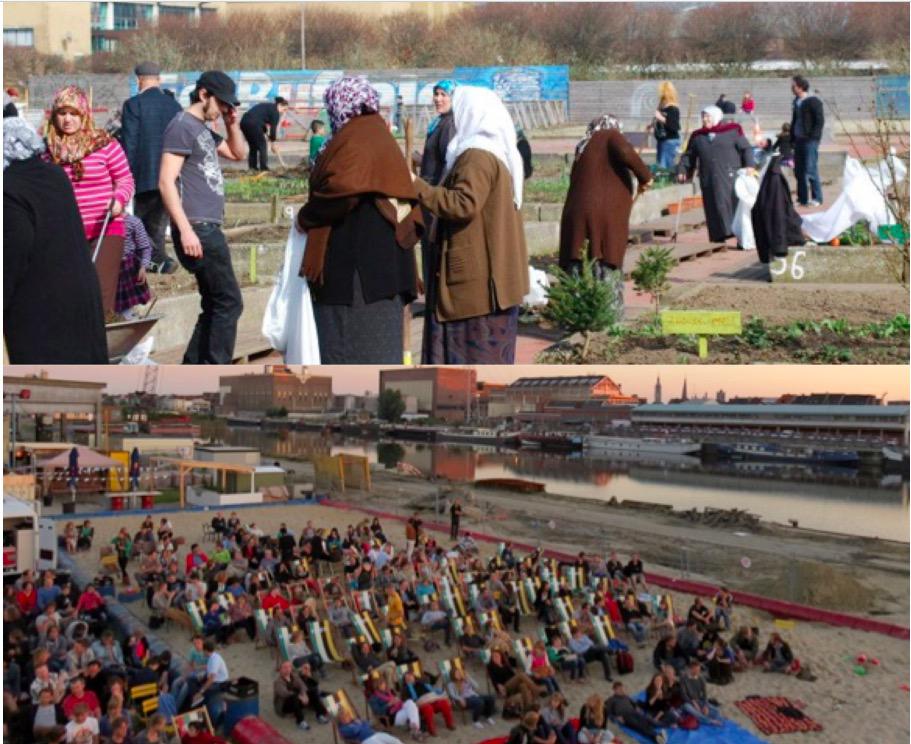 The City of Ghent has been experimenting with the temporary use of brown field sites and empty buildings for over a decade - often in the context of urban planning. These usually take very long to get from the development to the implementation stage. Using the sites and buildings in the interim counters neglect, brings a new dynamic to neighbourhoods, and offers added value for the city’s development.

In 2007, the City of Ghent, social partner Samenlevingsopbouw Gent (Social Structures Ghent), and social-artistic organisation Kunst in de Stad (Arts in the City) started the temporary use project De Site on the location of former telecom factory Alcatel Bell in the Rabot district. De Site became a creative meeting place that got residents involved in their district and set them thinking about urban renewal. They helped reshape their neighbourhood. Allotments, a greenhouse, urban horticultural plots, a football pitch, a bike playground, and an urban farmstead with a chicken coop were set up. Additionally, in 2010, the alternative currency Torekes was launched. By working on De Site, residents could earn Torekes to buy vegetables and other supplies in local shops.

Another large-scale urban renewal project is underway at the Oude Dokken, Ghent’s historical harbour docks. The plans entail a new residential area with some 1,500 homes, as well as recreational facilities and public services. The temporary use project DOK was started in 2011 as a co-initiator of concerts, open-air cinema events and flea markets. In 2014, DOK‘s role evolved into that of facilitator for DOK residents. Thanks to DOK residents’ great diversity, a wide array of activities can take place. Flexibility is at the core of DOK’s working environment. The area remains in use during construction, so residents have to make smart investments and work around the construction site and the plans for the Old Docks.

De Site involved residents in an urban renewal process that traditional participation methods would have left them out of. The temporary use project wasn’t just another analysis of how poor, densely populated, diversified, and young Rabot is. It gave time and space to the neighbourhood’s wishes, demands, and qualities and responded to several important needs in the district.

In recent years, DOK has given the derelict industrial site a positive image, transforming it into a lively, inspiring meeting place with events for all ages and a beach near the water. This has drawn in the inhabitants of Ghent and put the Old Docks back on the map, making it the place to be on sunny summer days.

Temporary use as a requalification instrument in Ghent, Nantes and Ostrava: Let them go... temporary use of urban space, REFILL Mag #6 p7 http://urbact.eu/sites/default/files/media/refill_magazine_6.pdf#page=7; A realm of opportunities for city activities and planning in Riga, Ghent and Amersfoort (Common ownership, DDSV RIGA p7) http://urbact.eu/sites/default/files/media/common_ownership_-_ddsv_riga.pdf#page=4;