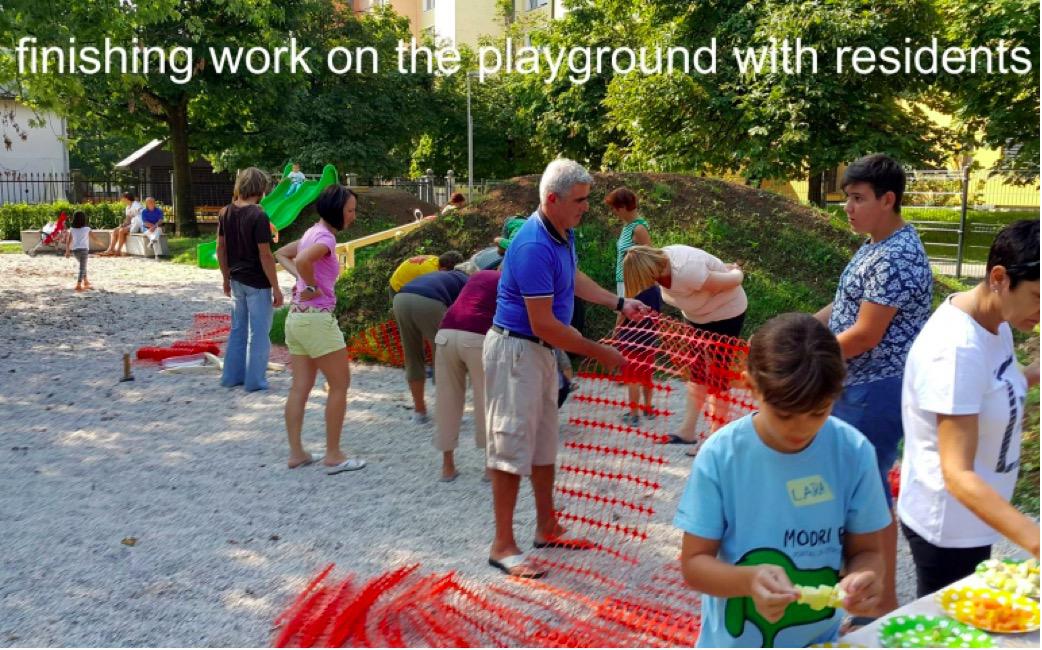 The renewal and revitalisation of Planina neighbourhood in Kranj (SI) implemented a sustainable urban strategy and brought new life to a degraded residential urban neighbourhood, according to the needs and ideas of its residents. The project focuses on integrated solutions to reduce environmental, transport and economic problems, issues of urban poverty, social exclusion and segregation, with the aim of strengthening social cohesion. It enables a comprehensive, participatory and integrated attitude of all stakeholders, bringing together the expertise and experience of the actors involved. It supports the economical use of (public) land and the transition towards rational use of energy while encouraging the cooperation between the city and the state. The project is concrete, transferable and proven in practice.

The project represents an effective tool for the implementation of measures planned by the sustainable urban strategy for Kranj. For this purpose, we have developed various tools for gathering information about the residents’ needs and wishes, as well as various methods of working with the residents through project-based learning. We have given them some space and time for an in-depth consideration of the quality of living conditions in their neighbourhood. They had the chance to get to know the status of ownership for individual areas of the neighbourhood, as well as become familiar with the notion of the general good. They could learn about the competencies and responsibilities of stakeholders and actors in their neighbourhood. A positive effect of this was that the residents know now who they can turn to when they have a certain question or problem.

It contains various polycentric development policies of the municipality (social, economic, environmental policies, policies of spatial planning and infrastructure, housing, educational policies, etc.) that are aimed at identifying the challenges with the goal of finding appropriate solutions for the renewal and revitalisation of degraded urban areas, in line with the values and principles of a sustainable urban life: stimulating economic growth and the creation of new jobs, improving the quality of life for citizens/residents while reducing the environmental footprint, and taking effective measures for reducing urban poverty and social exclusion.

Several groups of people were able to benefit from the results of the participatory approach: residents of different age groups participated in planning and assumed active roles and responsibility for the development of their neighbourhood.

The sense of connectedness is increasing and there is less vandalism as public surfaces are becoming more attractive and are used more frequently by the residents. Greater optimism and a positive attitude toward an improved quality of life in the neighbourhood can be noticed in posts on social networks and in conversations with the residents.

There is an increase in the number of various activities and events in the neighbourhood, organised by the residents and different organisations. The neighbourhood is becoming more and more interesting for establishing business initiatives and its public image is improving.

Cooperation among residents, experts and several organisations was established on the national and international levels. We examined the project together with different representatives of the professional public and they confirmed that it is innovative and that it takes into account the principles and the value of sustainable urban development.

We have set an example of good practice that is becoming more and more recognizable on the national level and with which the Ministry of the Environment and Spatial Planning wishes to encourage the renewal and revitalisation of degraded residential neighbourhoods in other towns.

We have established close cooperation between the residents and the municipal authorities, public services, non-governmental organisations and other important actors in the neighbourhood or in the municipality. We have provided small sums of financial support to carry out a planned project, so that the residents could have an experience of working together in planning and implementing the improvements that they wish to make. This is how they could directly address concrete challenges and contribute to a better quality of life in the neighbourhood.

The most relevant result of the project is the comprehensive plan for community programmes of neighbourhood renewal and regeneration that was made together with the residents, the experts and the stakeholders. It includes a clear timetable and a financing plan for the implementation, as well as a plan for future development.

We have developed various innovative and integrated methods of project work, aimed at the active participation of the residents, introducing them to several municipal offices, to experts in the field of urban renewal and to other stakeholders. We informed other Slovenian municipalities facing similar challenges and the interested public of our project and invited them to work together with us. We established a dialogue with several national ministries aiming at the establishment of guidelines at future tenders for co-financing the renewal and regeneration of degraded urban centres.

Since January 2016, there have been six working groups of residents, fifteen public events on the larger and on the smaller scale, attended by about 1 650 residents and taking place on nine different public surfaces and locations in the neighbourhood. Our partners were five municipal council offices, nine public services on municipal and national levels, four local communities, four kindergartens, three elementary schools, one retirement home and one local secondary school, ten NGOs, five experts in different fields and one local company for the management of apartment buildings and several private companies.