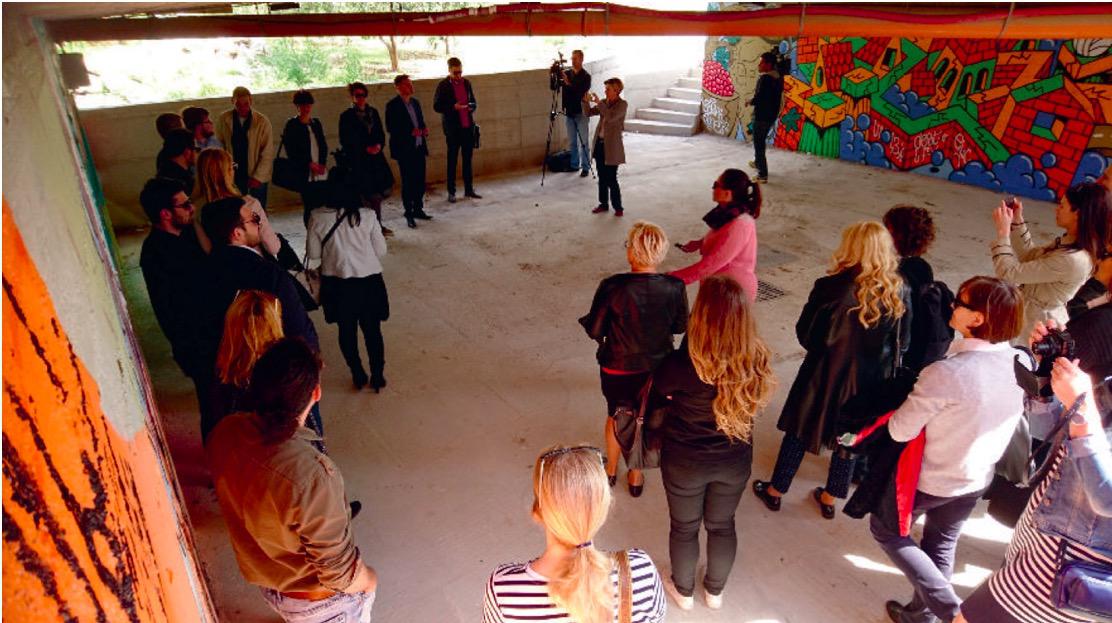 Because of Solin’s rapid growth, the public domain is fragmented and is generally underused. In the past few years, citizens have noticed this and expressed the need to reconnect with the waterfront. Large physical infrastructural barriers are not easily removed, however, especially not for a small municipality in Croatia.

Building a large tunnel or reducing the number of lanes or the speed limit is not possible at this moment.

Instead of being paralysed by these problems, Solin focused on making the mental barriers smaller. By making small, inexpensive and innovative interventions in the segregated urban space, the barriers themselves were put in the spotlight and treated as an opportunity. Solin has realized several specific projects aimed at creating new connections and uses.

The first project is a pedestrian underpass beneath a street with heavy traffic, which children use daily on their way to and from school. To avoid the danger of making it an unattractive and dark space that ends up underused, the walls were painted with site-specific graffiti. The underpass area is larger than its primary function requires, making it more of a space and less of a passageway. There is even scope for small-scale sporting activities. Thus, the underpass has become a new public space and a new tourist attraction because the artists are internationally known.

A second project concerns the refurbishment of the beach. This beach had been used for generations, but because of industrial expansion during the 20th century and regional infrastructural networks, it had become isolated and abandoned. The city decided to adopt a participatory approach to activate its underused areas, involving the local citizens in the design process. Together they have started with a clean-up of the beach and seabed. Currently, they are in the process of site-development and landscape works. Even with these small improvements, citizens have started to use the beach again, reclaiming the public space.

For this site, nearby industrial companies and the County were persuaded to provide funding as a sponsorship of the public space.

The projects are modest in themselves, but together they function as a system that connects pedestrian public spacein Solin.

The projects were constructed in a participatory way, with the result that they were immediately appropriated and used by the citizens. In the future, they will be part of a new strategy for the city.

The collaboration and the results of these interventions have been mind-opening for the public andother stakeholders, even for the administration itself. They have shown that it is not necessary to tear down all the barriers, but instead to deal with them by means of modern and affordable measures that help to forge new connections and open up new public spaces.